On this Veterans Day, the entire CWA family proudly salutes the thousands of CWA member and retiree military veterans and their families as well as the broader veteran community for their service and sacrifice.

In his Veterans Day message, CWA President Chris Shelton uplifts the CWA veterans who have participated in the CWA Veterans for Social Change program and highlights the participation of IUE-CWA military veterans in the “Bring it Home GE” campaign calling on General Electric, one of the largest military contractors for the U.S. government, to end its offshoring practices and reinvest in American workers.

“Even through the difficulties of the last year and a half, our veterans have continued to step up as activists, organizers, and leaders in our union and beyond to meet the challenges we have been faced with and ensure the progress of the working class,” said President Shelton. “Since the launch of the CWA Veterans for Social Change program almost two years ago, CWA has been organizing a broad base of CWA activists who are veterans and active duty service members to build power and strengthen our union by advocating for issues that impact other veterans and working families.” 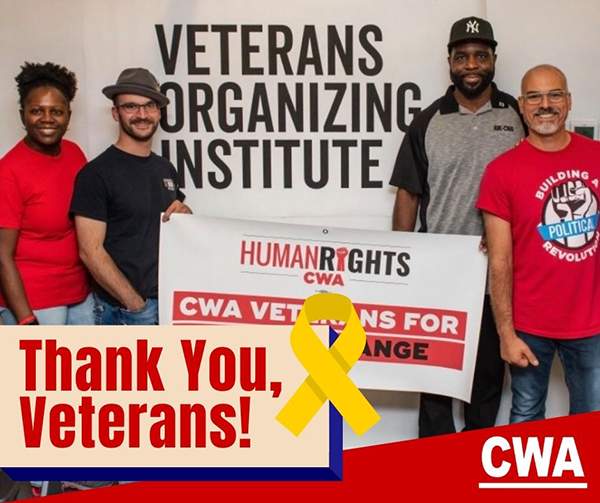 Download the CWA STRONG app and receive information directly on your phone.

Search for your Local or browse the directory.

Union Plus offers services and discounts, including savings on wireless service, travel and more.

At CWA, we're building a movement for economic justice & democracy every day. Stay involved by signing up to receive CWA's weekly e-Newsletter.